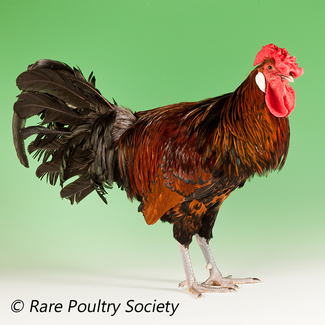 OLD ENGLISH PHEASANT FOWL
Origin: England
A very old English breed, but only given its current name in 1914 as a revival of the original Gold Spangled Yorkshire Pheasant Fowl and Lancashire Mooney Fowls that had existed for centuries, but had mostly been absorbed into the Hamburgh breed, and selected for exhibition points instead of utility qualities. A group of enthusiasts searched remote farms in the Yorkshire Dales and other Northern Counties to find surviving flocks of the old utility type for this revival.
The Old English Pheasant Fowl is a good layer of white eggs and the male is kept for its meat, for a light breed it has a meaty breast. They were popular with smallholders until 1950’s, although never kept by large scale commercial producers.
This active bird needs extensive free-range conditions, being a forager by nature. It is a hardy breed and tolerant of the cold. They are docile except at breeding time.
There are two colours Gold and Silver, although Silvers are very rare. At the end of the gold or silver feathers is a simple black crescent. It has a rose comb where the leader is quite long and follows the line of the skull, white oval earlobes and slate coloured legs and feet.
The breed is rare, its strength is in the north where more can be seen at local shows than at the National.
There has never been a bantam version.
Depending on the strain they lay about 160-200 white eggs per year.