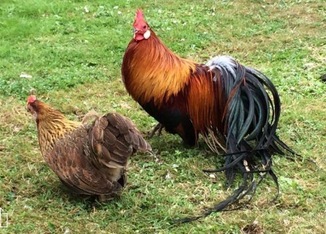 This bantam Japanese longtailed breed is standardised separately from the large fowl longtails, being very different in type. It has been standardised relatively recently, and is one of the two Japanese Longtailed breeds to be accepted by the Poultry Club of Great Britain under its correct Japanese name. O- meaning tail, hiki – meaning dragging. [The other is the Satsumadori gamefowl breed, classified within the Asian Hardfeather category.]

Bred by Ashley Betteridge & Helen Berry
The Ohiki is very short legged and is of a distinctive rounded appearance and full feather, with narrow, supple tail and hackle feathers. Any stiff feathers in the tail are incorrect for the breed and suggest Bantam Yokohama blood. The quality, quantity and length of tail feather in the male increases with age. The female maintains a very rounded appearance with a full tail. The short legs should be virtually hidden by the full plumage and low wing carriage. Happily, Ohiki do not have the lethal short-legged gene as is found in the Chabo (Japanese Bantam).
This attractive little breed is growing in popularity and is now seen regularly at shows. Striking to look at, often described as 'garden jewels', they are friendly, happy little birds which, when grown, are hardier than they look and are great for children to handle and show.
As with the other soft feather longtailed breeds, the quality and quantity of tail and hackle feather is of paramount importance, colour being very secondary. Something that should be mentioned is that it is an occasional peculiarity of the breed for the white earlobes to turn yellowish when moulting/in blood feather. It is a temporary condition and the earlobes revert to white again when the bird is in full feather.  The breed is classified as True Bantam, as it has no large fowl counterpart, but stays within the Rare Poultry category.
​