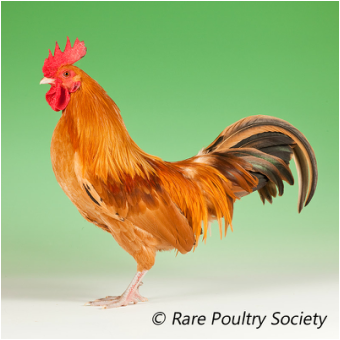 Origin: Asia
​Nankin
Nankin Bantams, this is a bantam only breed, originally from somewhere in south-east Asia, but they have been bred in the UK for a very long time, possibly as long as 500 years, so are regarded as a UK native breed by the RBST. Nankin Bantams were not reported in any specific
part of south-east Asia during the 19th century by British, Dutch or other European colonial people there, many of which would have been poultry keepers with an interest in chicken breeds. Therefore the UK was the principal home of the Nankin as a specific breed for a very long time.

However they were not particularly valued in the UK, usually dismissed as 'common yellow bantams' ,especially after the 1850s, when poultry shows and interest in more exotic looking fowls started. About 1800 Sir John Sebright included Nankins as one of the breeds he used to make his first Gold Sebright Bantams, and other breeders used Nankins to make Buff Orpington
and Buff Plymouth Rock Bantams. There are very few records of Nankins in UK poultry show results, and by the early 20th century, only three recorded breeders (Mr Cresswell, Mrs Ricketts and Mrs Cross) and one known photograph remained of them. At some point, the Martin family
in the Wisbech area took them up, and kept them going to the 1955, when Mrs Peters, from Sussex, obtained some from Mr Fred Martin and started their revival.

In the many decades of Nankins only just surviving thanks to the efforts the Martin family, there was some loss of their characteristic jaunty style and an increase in their size. Since the 1980s there have been rather more people breeding them, and a concerted effort to get them back to type of Mrs Cross's birds in that one photo in the 1921 Encyclopaedia of Poultry by J.S. Hicks. There is also an enthusiastic group of breeders reviving Nankins in the US.

The name Nankin is believed to have been derived from yellow nankeen cloth, which was popular in the 19th century, and is a fair comparison to the plumage colour of females, Nankin males being a richer, more orangey shade. Their tail feathers have some bronze or black markings, much more on males than females. They are hardy little birds, useful broodies and mothers, and can be kept in any of the usual hobbyist poultry housing systems. Select for small size and the desired jaunty carriage when breeding Nankins, although larger and less stylish hens will, of course, be very useful layers and broodies.