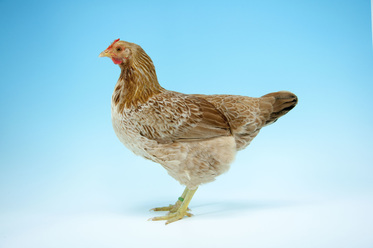 Origin: Great Britain
John Wright of Marshside, Southport ,Lancashire started the process which eventually led to the creation of the Marsh Daisy in 1880 by crossing an Old English Game bantam x cinnamon Malay cock with Black Hamburgh x White Leghorn hens. Two others joined the project, a Mr Wignell and Charles Moore, who added Sicilian Buttercups to the mix .Marsh Daises were not exhibited until 1920.By this time a breed club had been formed, several of which lived in two clusters ,some in the original Lancashire, the other group in Somerset.
Marsh Daisies continued to attract interest as a hardy dual purpose breed amongst smallholders, but were never regarded as a top class exhibition breed or one kept by larger commercial poultry breeders, so were already declining by 1940.They were kept going through to the 1970’s, when a new generation of poultry conservationists began their revival,using old strains which had been kept going by some breeders in Somerset.
The main colours are Brown, Buff and Wheaten. These three varieties got somewhat mixed up during the period when they almost went extinct, and present day enthusiasts are trying to stabilise them, probably completing a process which was probably never properly finished back in the 1920’s and 1930’s.There are also whites and blacks but they are very rare.
The male head is dominated by an impressive rose comb and striking white ear lobes. There are no bantams in this breed. This active, upright and attractive bird has a friendly docile character and mixes well with other breeds .It is a hardy bird that loves to forage-so they are happiest when free range.
The Marsh Daisy w.
Unfortunately fertility has suffered over the years-a hatch rate of 50% is considered good; some breeders however say that their hatch rate is far higher. The small gene pool means that fertility levels are always likely to be an issue. The hens rarely go broody. It is not a fast growing breed but youngsters can usually be relied upon to develop into strong and disease resistant birds. The Marsh Daisy is relatively easy to keep.
Dependant on the strain they lay about 250 tinted eggs per year, but egg size is not impressive. They should continue to lay well for three or four years.