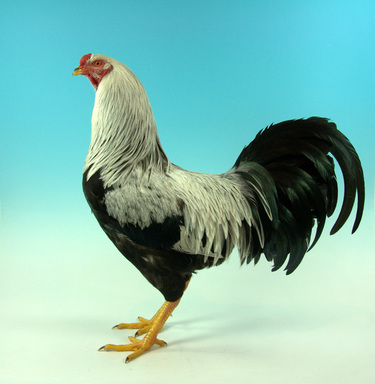 Developed in northern Europe, the Twentse or Kraienköppe has suffered from some confusion regarding its nomenclature. The dutch Twentse is reasonable, however when the German Kraienköppe, is compared to the dutch Kraaikoppen, for the Breda fowl, it is understandable that correct spelling must be intrinsically observed!
Kraienköppe were based on initial crosses between local fowl, and birds imported from asia, such as Malay. The breed remained an offshoot from the popularity of cockfighting, as inappropriate birds were sent away from the cities and towards the countryside, where they were crossed with the local fowl to produce prototypes of the Kraienköppe we see today. Early Kraienköppe were said to have been certainly more gamey in appearance, with the type we see today due to corsses with Leghorns in the 1920s.
Unfortunately the popularity we see today was not mirrored in the early years, and importations during the 1920s and 1930s died out relatively fast. It is suggested that the majority of birds from stock ‘native’ to the UK, were from importations in the 1980s, although recent years have seen additional bloodlines entering the country, which have significantly improved the standard of some of the birds being exhibited.
Compartively, the bantams have done incredibly well. Considering that the German standards committee recognised these as late as 1957, with Dave Scrivener writing in Rare Poultry Breeds, that “Since 1000, even major shows have only had tw or three [Kraienköppe] bantams at most”, it is impressive to see such incredible entries as we see, even in smaller shows. In particular, with the state of affairs as Dave described it in 2000, Kraienköppe bantams winning Best in Show and Reserve Show Champion awards would have been as rare as the birds themselves. We have however seen incredible success from dedicated exhibitors such as Allen Harding in Wales, who is now solely breeding Kraienköppe fowl in both large and bantam and a number of colours.

From the judging perspective
Kraienköppe are a Soft Feather Light breed, therefore it must be remembered that although needing to appear “powerful”, they shoudls till retain those qualities one associates with Lights.
One feature that judges often quote is the wedge-shape expected from the breed. This simply mean that the body is expected to become fuller towards the rear of the bird, starting narrower.
The back should be relatively long, held straight, with the strong shoulders expected from the asian-cross origins of the breed. Wings of Kraienköppe should be carried close, with the tips being just covered by hackle, and the tail being held relatively low, at an angle of 30-40o. Type itself is worth 25 out of a possible 100 points.
The head is an important part of the breed, and is worth 20 points. The breed name Kraienköppe roughly translated to crow-headed, which is why it shares a similar name to the Breda fowl. Therefore, a short, arched head is ideal, the face being free from feathers. The comb itslelf should be narrow walnut in type, and should be well-set and shaped somewhat like a half-acorn. Wattles should be very minimal and often barely seen.
The neck should be of a good length, curving slightly backwards and with plenty of hackle in the males. Legs and feet should again be powerful, and with smooth, tight feathering, with 15 points for these. The shanks should be slender and free from feathers, therefore perfectly smooth. Kraienköppe have four toes, which should be relatviely long and evenly spread.
Condition is worth 10 points and can often distinguish an average Kraienköppe from an excellent bird. Due to the nature of the breed, a specimen in excellent condition is capable ot achieving top honours (as long as this is combined with good examples of each of the key breed characteristics detailed in the points system). This has been proved time and again at shows not only this year, but also the previous couple of years.
Kraienköppe have yellow beaks with dark tips, and yellow-red to red eye colour. Face, comb, earlobes and wattles should be red, with the legs and feet being a bright, vivid yellow.
Weights for the Kraienköppe are between 2.50 and 2.95 kg (5 ½ to 6 ½ lb) for the males, and between 1.80 and 2.50 kg (4 to 5 ½ lb) in the females. The bantams should weigh 850g (30 oz) for males and 740g (26 oz) for females.
Serious defects to point out include short or narrow bodies, roach backs (dating back to their Asian heritage, and to avoid current crosses), poorly-furnished or upright tails, and low stance.
Coarse plumage is another defect likely highlighted by the avoidance of crossings with Asians, as well as pointed or narrow heads. Any sign of fluffy plumage, narrow sickles or varying comb types are also serious defects.