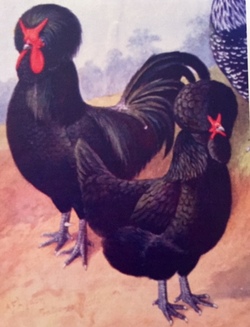 The breed has its origins in the small town of Crevecoeur in Normandy, France. It is reputed to be the oldest French breed. It was first introduced into the UK about 1852.
The breed is crested and bearded and has a unique medium sized V-shaped horn comb.
In general appearance the breed resembles the Houdan but the body is heavier with a bold upright carriage. They were mated up in the nineteenth century with Dorkings.
Originally raised for meat and egg production, they were easily outdone in both categories and is now kept primarily for ornamental and exhibition purposes.
They are reasonable egg layers, the white eggs are of a useful size of 60 grams and sometimes 70 grams. The feathers are black,  varieties have been produced in blue and white since 1990.
This relatively docile breed rarely goes broody. Whilst liking space they do not unduly mind being confined. As regards their meat, after 9 months some say it is a little tough. A fault to look out for is white ear lobes.
The breed is very rare, even in France. In the UK there are only a handful of breeders.